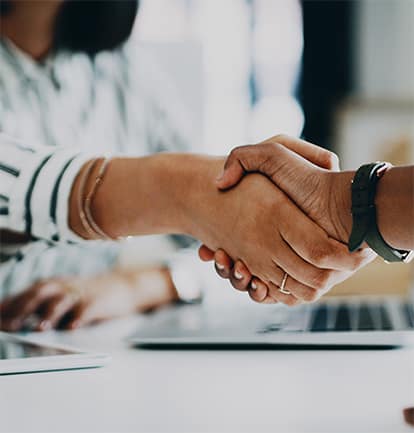 Cyndi Walters was named president and chief executive officer (CEO) of National Lutheran Communities and Services (NLCS) in May 2021, assuming the position full time in August 2021. Prior to this role, she served as chief operating officer (COO) since 2016.

Cyndi has served at NLCS in varying capacities for nine years; first as a consultant before joining as chief operating officer in 2016. Cumulatively, Walters has over 30 years of experience in the senior living industry including a strong background in strategically growing and diversifying the organization and an enhanced focus on operating as a senior-living system and leveraging its benefits and efficiencies. Prior to joining NLCS, she provided project management and advisory services to senior living organizations through Walters Advisors, LLC. She has also served in a leadership role at Presbyterian Senior Living in Dillsburg, Pennsylvania, and during her 19 years at KPMG (a global network of professional firms providing audit, tax and advisory services), spent significant time as a partner and leader of their National Senior Living Advisory Practice.

As president and CEO, Cyndi’s focus is strategically growing and furthering NLCS’ mission to honor, inspire and support choice and opportunity in partnership with older adults. Cyndi is an advocate for “aging with choice,” which means supporting older adults in making their own choices in aging, whether it means moving to a senior living community or bringing in supportive services to their home. She is also an advocate for team members across the organization and leads a team dedicated to ensuring NLCS remains a Great Place to Work® and an employer of choice for those who have a heart to serve older adults.

Cyndi is a native of the Harrisburg, Pennsylvania area and holds a Bachelor’s of Science degree from York College of Pennsylvania.

Cherie has served as the Executive Director of The Legacy at North Augusta (formerly known as Bentley Commons) in Staunton, Virginia since the opening in 2009.

Cherie has worked in the senior industry for the past 20 years and has opened multiple senior living communities. Prior to opening The Legacy at North Augusta, Cherie served as the Executive Director and administrator at RoseWood Village at Hollymead in Charlottesville, Virginia. Cherie is dedicated to the high quality of care in the senior industry. She utilizes her interpersonal skills to quickly build relationships and form trust with people from various backgrounds to develop a compassionate and caring community.

Emily Anderson joined The Legacy at North Augusta team in 2012. She is a graduate of James Madison University where she obtained a Bachelor of Science in communication studies with a concentration in health communication. She obtained her Assisted Living Facility Administrator license under the supervision of our Executive Director Cherie Powers. Emily is one of the founders of the Greater Augusta Regional Chamber of Commerce’s Aging in Place Round Table. She is also on the planning committee for the Greater Augusta Walk to End Alzheimer’s and facilitates the Fishersville Parkinson's Support Group.

Stanford Moats brings more than 20 years of community and retirement living sales experience to the sales team at The Legacy at North Agusta.

Prior to his employment at The Legacy, he held progressively responsible sales and director positions at assisted living and memory care communities.

Stanford is a results-oriented leader who enjoys collaborating with his colleagues to create opportunities for older adults, he is passionate about generating positive relationships and experiences.

Melisa has been with The Legacy at North Augusta since the opening of the community in 2009. As the ConnectedLiving Manager, Melisa oversees a wide array of programming to meet the mental, physical, spiritual and emotional well-being of residents at The Legacy. Melisa builds close relationships with residents and quickly learns their personalities, which helps her facilitate programs tailored to each resident. Her goal is to ensure residents continue to live vibrant and active lives. Melisa received an Activity Directors Certification through the National Certification Council for Activity Professionals and is a Certified Dementia Practitioner.

Melisa is a graduate of Buffalo Gap High School and grew up in the Shenandoah Valley. She resides in Greenville, Virginia with her husband and two children. When Melisa is not at work, she loves spending time with her family, cooking, traveling to the beach and quilting.

Chris Sorrells was hired as director of dining services in August of 2022. Prior to working at The Legacy at North Augusta, Chris worked as catering chef at Washington and Lee University, and executive chef at Mary Baldwin University. At Washington and Lee, he polished his skills working with Executive Chef Xavier Deshayes formerly of the Ronald Reagan International Trade Center. At Mary Baldwin University Chris worked as executive chef, managing up to forty employees while taking classes online. Chris likes to spend his free time fishing, hunting, foraging, playing music and entertaining friends and family.

Stephanie Wentz joined The Legacy at North Augusta in April 2022. She brings more than 20 years of human resource experience. Stephanie has a passion for caring for team members and believes ultimately, this helps them provide better care and service to the older adults The Legacy serves. Stephanie lives in Shenandoah, Virginia with her family. She enjoys cooking, traveling to France, warm weather and working in her small garden growing organic vegetables.