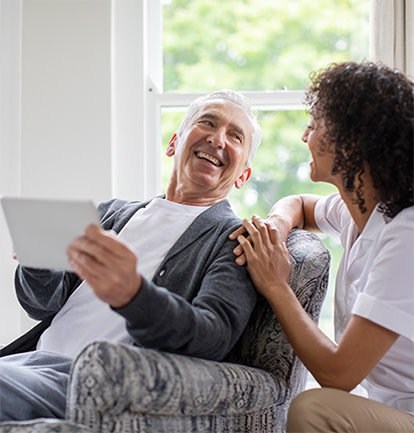 Residents at The Legacy at North Augusta—A National Lutheran Community took a stroll down memory lane when students from Robert E. Lee High School threw a Senior-to-Senior Prom. While the high school seniors still have a few months before their own prom, they used this chance to build relationships with The Legacy’s seniors and throw a party they’ll never forget.

Sixty residents joined 35 students at 11:30 a.m. on Friday, March 24, 2017 for the prom – dancing the [morning] away to classics like the Macarana, and even some golden oldies.

“The boys were kind of bashful as usual,” said resident Dorothy Briehl, “but the girls, boy do they like to dance!”

The Legacy at North Augusta played host to the event, utilizing the atrium area as the dance floor. Residents, staff, and students all danced without a care – one student even described a 98-year-old resident by saying he was “[crushing] it on the dance floor,” as reported by WHSV who covered the event.

In true prom etiquette a King and Queen were crowned – residents Max Lockridge the King, and Dorothy Briehl the Queen.

“Made me think back to the good old days!” said Max. “I walk with a cane but I got up on the floor and danced.”

With so much positive feedback from both students and residents, this won’t be the last Senior-to-Senior Prom – plans for next year’s are already underway!

Return To All News